After a long and exhausting weekend moving heavy lumps of iron about in the hot sun, it makes a pleasant change to be doing less effortful tasks. Today I’ve been wire-brushing and painting one of the three spare Peckett wheelsets, now that the cognoscenti can admire them in their new location.

Brushing off the decades of rust, muck and verdigris from these has thrown up an interesting detail- despite the years of weather and corrosion, fragments of the original paint survive, most commonly around the crank pins, presumably due to years of accumulated oil and grime protecting these areas better than elsewhere. 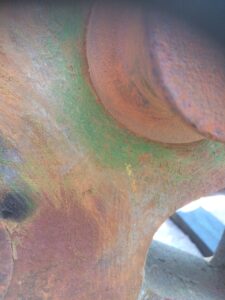 Although maybe not immediately apparent, the green in the photo above is the original Peckett works livery as applied to most of Peckett’s output. I wasn’t entirely sure (although it was highly likely) that Lamport and Scaldwell had ever borne the lined works livery, as the photos we have show them in an unlined green, presumably applied during their working life at Scaldwell. Our loco has been repainted since being taken out of service, and rubbing down various patches has so far revealed no evidence of the lining, so I was rather pleased to find traces of it here. If you look closely, a scrap of yellow lining can be seen just below the crankpin. Before priming over the lot, I photographed this and measured both the thickness of the lining and its distance from the axle centre as a reference for later.

Priming improved the appearance of the wheelset greatly, although took much, much longer than I had expected. Fortunately I’d chosen to start on the axle under the tree, which afforded me some shade. 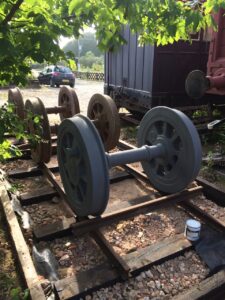 Spot the odd one out.. The plan is to paint these in colours that give an indication of how they would be in use- green, the livery colour, on the wheels- red on the axles themselves, this being the colour of all parts between the frames, and silver or grey wherever a bearing face is present- i.e. journals, crankpins and treads. I sadly didn’t get as far as I would have liked today, but one wheel is painted, and gives an indicaton of how they will look when finished. The first photo makes the green look rather more violent than it is in reality.. 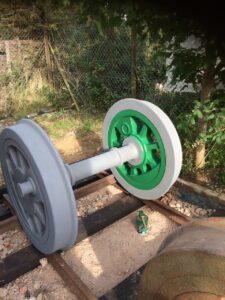 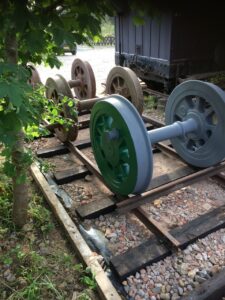 Paint, and indeed Pecketts, is clearly the topic of the day, as while I was working on the wheels, a delivery turned up at the gate. This is an order of primer, undercoat and coach enamel for Scaldwell, from Craftmaster Paints, who supply specialist paints designed specifically for the steam and heritage transport sectors. Not Peckett Green, our need for that is some way off yet, but red for the motion parts that are coming off and being progressively cleaned and fettled up. It’s good for the soul- and for the public, when they’re allowed back in- to have an increasing pile of prepared parts ready for re-assembly, however far off that might be. Watch this space.. 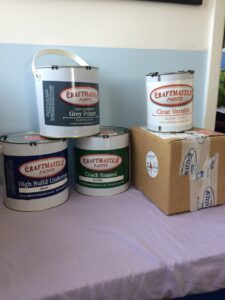 Lines from the Past