First off, we’ve had some further photographs of progress on the replica build of ‘Blyth’, one of the three Sharp, Stewart & Co. 2-4-0 tank locomotives bought by the SR in 1879 for the opening of the railway, sent to us from Dave at North Bay Engineering, who are carrying out the build. He’s sent us a photo of the new connecting rods, those which transmit the power from the cylinder cross head to the leading (driven) axle. 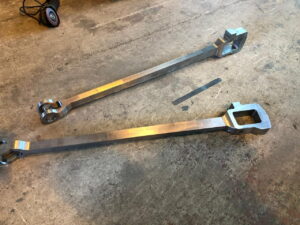 When I first saw these, it puzzled me, due to the forked ends, what would be termed the ‘little end’ in automotive parlance, that fits onto the piston crosshead. The conventional detail is to have a single journal with bearing, which slides into a hollow pocket in the crosshead casting, to be held there with a taper pin and nut- this is the arrangement on Scaldwell, for example- but on re-visiting photographs of the original Southwold locomotives, they did indeed feature this unusual forked end which embraced a central web incorporated into the crosshead. The Scaldwell arrangement is shown below for comparison- note the little end bearing inside the walls of the crosshead. 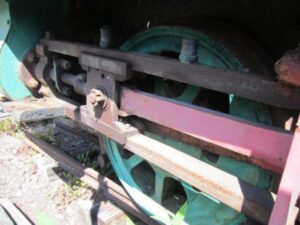 It’s also worth noting the rectangular opening at the ‘big’ end- i.e. the end that fits to the crank pin on the driven wheel set. This is a much more conventional detail, the opening receiving a two-part bronze bearing, which can then be adjusted by a taper cotter, meaning wear can be taken up progressively as necessary. What’s interesting about this feature is that the Sharp, Stewart locomotives were not built in this way- as built, they featured the rounded solid ends that became familiar many years later, carrying a round bush that provided no adjustment for wear. As time went on, however, photographs show that the original connecting rods were changed for ones to the same pattern as those above, initially retaining the round ended coupling rods (the ones that couple the wheels to one another). This situation persisted for some years, but as the photo of ‘Blyth’ below, taken at Bird’s Folly loco shed some years after closure, the rods were all changed for conventional square ended cottered types. No doubt this work was carried out at the GER’s Stratford works, presumably to aid ongoing maintenance. Whatever the reason, the round ended rods must have been an unusual detail on such little workhorses in 1879. 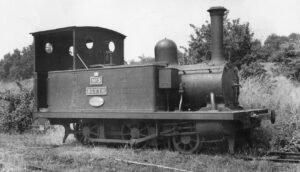 Moving on from new, shiny locomotive parts, we’ll now discuss old and rusty ones, of which we have something of a surfeit. When Scaldwell turned up at Blyth Road, she came with a few springs and bits and pieces from her sister engine, Lamport, which sadly failed to escape the cutter’s torch. When Scaldwell was purchased for preservation back in the ‘sixties, her new owners collected those parts of Lamport that might be useful, including the wheelsets, which show rather less wear than those on Scaldwell, although after 40 odd years, their external appearance leaves something to be desired.

These last have been sitting around at Steamworks for some time, and although well worth having, generally seem to always be in the wrong place. To address this issue, John (a new volunteer- and yet another John!) and I laid a short track panel inside the front gate to display them on, and with Brian’s assistance (and that of the old Ferguson tractor) hauled two of the wheelsets across the site to their new home. Getting them up the 8” or so onto the new rails provoked a bit of head scratching, but reverting to tried and tested Archimedean principles, we got the two up on the rails and chocked in place. There is a third, which will also be heaved up there, but that will have to wait for another day. Once installed and securely clamped to the rails, I’ll give them a coat of paint to smarten them up. They will be visible to the public through the fence even when we’re closed, so might add an extra element of enticement as the walkers come past! 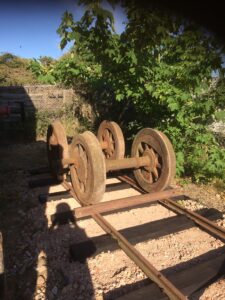