It’s been raining persistently since Friday at Steamworks, and presumably everywhere else in the region as well. Some clever comment about it falling mainly on the trains seems indicated, but any effort I made in that direction quickly became too tortured for public consumption.

On the one hand, it’s rather welcome- it saves me the chore of watering the plants daily, and it helps keep water in the pond, the level of which has become alarmingly low in recent weeks. When the ducks walk across, you know matters have become severe.

The down side, apart from the incredible burst of growth it inspires in the weeds, is that outside work, of which there is much, becomes an unpleasant affair. There’s plenty of indoor work too, but the heavy engineering type work I would usually carry out ( pulling bits off Scaldwell, for example) is verboten, for the simple reason that it’s too high a risk for working on one’s own. 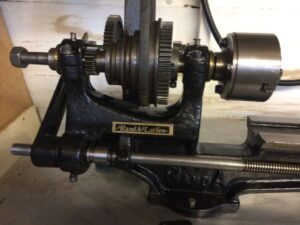 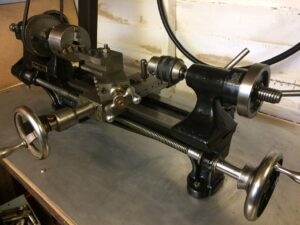 Fortunately, one job I did have on the back burner was the re-assembly of the 6” RandA (that’s the name of it, derived from R & A, the manufacturers) lathe that was donated to us last year by Mrs Ballantine. Robin and I had stripped it down for cleaning when it came, and had already polished and painted the parts, so I spent a pleasant day on Saturday in our little shed oiling and reassembling the machine. It’s not quite there yet- the motor mounting setup is my own, and not currently satisfactory, but that will need to wait until there are other volunteers about, just in case I cut my own head off, in which case a plaster would need to be applied. It’s a handsome machine though, and when working will be extremely useful, increasing the work we can do on site, especially for the little engines. Bean by bean the bag fills.. 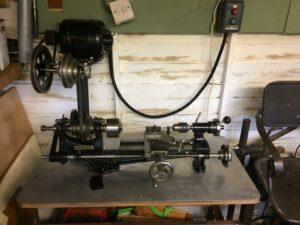 In praise of rain (sort of)..
Tagged on: Lockdown