Two, initially, on Tuesday. Richard and William Stone, father and son, came down to make a start on inspecting the various bits of equipment at Steamworks for the PAT test. In their usual efficient way, they compiled a thorough list of all our equipment, which will be doubly useful for inventory purposes. As can be seen from the picture below, William was deploying his skills rooting out and visually checking it for faults, while Richard deployed his skills by sitting down to tell William what appliance to look at, and then writing it down. It’s always a joy to watch a father-son team working in such close harmony.* 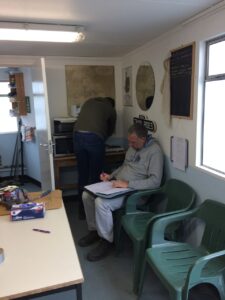 As for today, it’s been a full day. More stones turned up- in this case, three tons of them. This is the gravel for the new area outside the shop and café. Fortunately, today was a volunteer day, with our maximum 5 volunteers currently permitted under social distancing measures in attendance, so the gravel was quickly raked level ready for the next load. I think it’s going to look quite smart when it’s finished. Toby, John H and Brian all lent a hand spreading it out over the weed barrier. 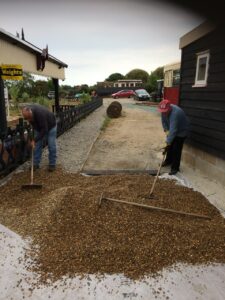 (The abandoned rake in the foreground was mine, flung aside in a fever of journalistic duty to bring you pictures of life at the Sharp End.) 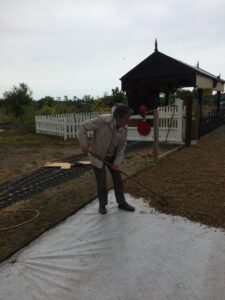 There’s more, as Jimmy Cricket might have said, if I’d asked him. Toby and Whisk remain hard at work on the Manx Northern coach, with Toby shown demonstrating how to clamp and glue a split in the timber, and John Handley working in the little bookshop hut at the bottom of the site. I’m not sure what he’s demonstrating here, but to judge by the look of things he might be rehearsing for the ‘sawing a lady in half’ trick. 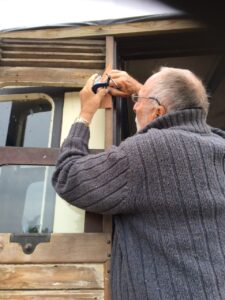 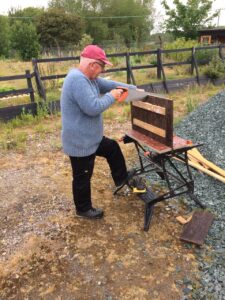 Ted Swain joined us as well today, and being currently barred from his preferred spot in the Portakabin ( apart from the necessary ablutions, the Portakabin is currently out of use for all volunteers until lockdown ceases), he took a perch in the (occasional) sunshine, polishing up the spectacle frames from Scaldwell. (No really, that’s what they are. The face of the cab they fit to is known as the spectacle plate.) Not so much fun in the drizzle perhaps, but he kept at it all day. 40 years of verdigris is not the easiest thing to remove, apparently.. 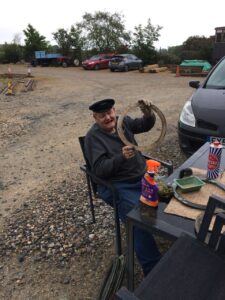 * I did ask them to oblige with a few bars of ‘Sweet Adeline’, but for some unknown reason they declined.

A week of stones