I have a sneaking fear that my punning titles may be becoming a little obscure even by my standards, but we’ll let that pass. There’s no prize for the first one to get it.

In the general catch-up I’ve been skipping over a lot of ornithological bits and pieces, so this post is a sort of mopping up of those.

One notable acquisition has been a family of Moorhens. I say a family, it started out as just one, and then there were moorhens. I’m surprised they consider the much-depleted pond sufficient for their requirements, but it doesn’t seem to bother them. The little ones are growing almost by the day, although they still look entertainingly raggedy around the edges. They were all out for (presumably) a walk this week, bizarrely watched over by one of the peacocks..

Good this, isn’t it? We also had a visit from a squadron of swifts, all zooming and dive-bombing about. Lovely to see them, but incredibly difficult to photograph, nature being largely unhelpful in such matters. Essentially, here is a photograph of some power lines that may or may not contain an unspecified number of swifts. 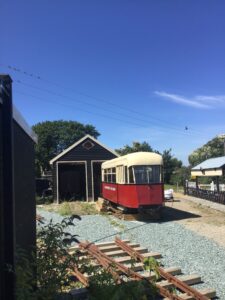 The peacocks remain occasional visitors, which is always lovely, even if they do stalk around quietly to turn up in unexpected places. 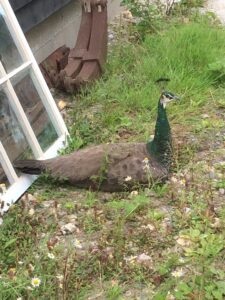 I’ve also had the benefit of the company of a Robin- of the feathered variety- that took to following me round whilst I watered the plants, presumably because this brings up the grubs, although I like to think it’s down to my natural magnetism. This is him: 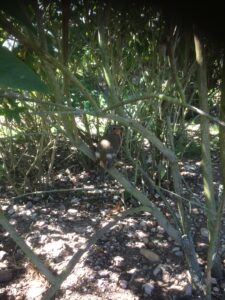 When I realised he was following me around, I bought some dried mealworms to tempt him with, as apparently they go nuts for those. Only of course they don’t, or at least this one doesn’t, so I now have a spare bag of dried mealworms, only slightly used, one owner from new. What he does go for, however, is crumbled fat balls ( let’s face it, who doesn’t? ) and it wasn’t that long before he was happy to eat out of my hand. 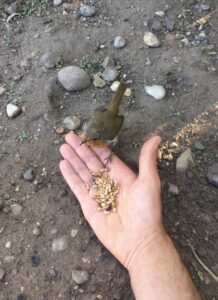 I say eat out of my hand, once he’s plucked up courage to hop up there, he stays put and stuffs his face, which is actually rather charming. He’s a funny, undersized, slightly scruffy little chap, and now knows exactly where to hide in the buddleia  to wait for me. 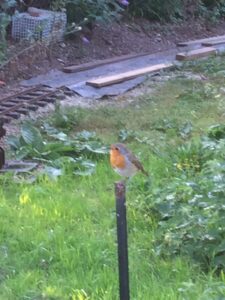 This isn’t him. This is a thug, impostor and charlatan- nothing more than a vile and unscrupulous super-fatted bully. Don’t be fooled by his mawkish Christmas-card nonchalance. This feathered Machiavelli has recently learnt to turn up in the same spot and try to wheedle food out of me, but he hasn’t got it quite right. He snatches food and runs away, and it’s precisely that sort of braggadocio and rudeness that gives him away. Sadly, he’s been bullying my rather scruffy little chum, who now only appears cautiously hiding in corners, before being swooped on and chased away. Still, he’s picked on a Robin with powerful allies this time. If you see him out and about, call the authorities immediately. He’s vicious, but a sucker for crumbled fat balls. It’s bound to be his undoing one of these days.

Fun, fun, fun in the Audubon
Tagged on: wildlife