True to form, I’ve fallen rather behind on the volunteer’s day news, so it seems apposite to fill in the gaps, as it were. Starting in reverse order, as John has mentioned in his last post, we’ve been filling in the gaps quite literally, as John Rawlings has built and fitted two beautiful ( and heavy) doors to the front of the engine shed. Fortunately Robin Vintner and myself were on hand to help lift them onto their hinges, plus new volunteer John Harper. The height and weight of the doors makes them unwieldy things to manhandle, but we got them up there in the end. I managed to snap our little team contemplating the completed doors.. 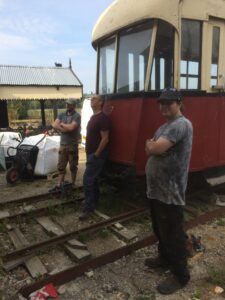 And the doors themselves, in situ. By the end of this week, both sets will hopefully be in position- something of a transformation.. 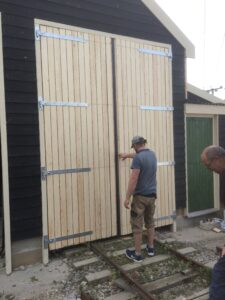 As regards other volunteer activity, the last few weeks have been quite full. Robin and I have tidied our tiny shed and have been progressing with the rebuild of the steam driving trailer, which thankfully is slowly reaching the finishing stage, of which more, doubtless, anon. John Handley continues with the panelling in the café WC, whilst Toby and Whisk have been working on the trackbed for the 3’ gauge demonstration line. 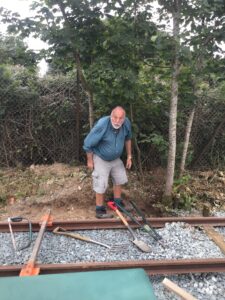 We were lucky at the end of July ( end of July- how did that happen? ) to have a visit from Linda and Keith, who come down about three times a year ( a normal year, that is ) for a week and help out on site. It’s always a pleasure to see them, and for the Wednesday and Saturday they were here, they were hard at work, Keith painting the woodwork of the new shed extension; 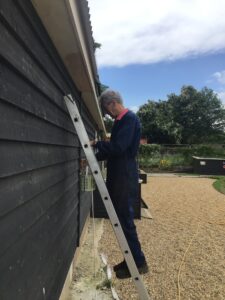 whilst Linda attacked some of the bumper crop of weeds in the middle of the site. 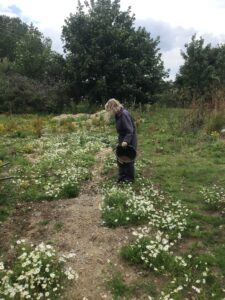 This last is one of those ongoing jobs, as we’re slowly tackling the established weeds and the compacted ground, spreading grass seed and red clover seed as we go. Not only will this improve the appearance of the site immeasurably ( as indeed it is already doing, as the clover springs up quite quickly ) but the clover in particular is great for improving the soil and breaking up the substrate, which here isn’t very far down. It’s also excellent for bees when in bloom, and is apparently much loved by the rabbits. I’m hoping that if there’s plenty of clover to eat, the bunnies will lay off my plants for a bit.

Ted, meanwhile, is still working his way slowly through a pile of heavily corroded spectacle frames, and making quite impressive progress, it has to be said. Sooner him than me, but every Wednesday sees him back at it. 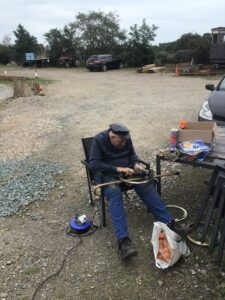 Not a Wednesday photo, but a Tuesday photo from a couple of weeks ago- John Ridgway has been fettling the electric locomotive to ensure its readiness for whenever-we-might-be-able-to-use-it-again. Mostly battery charging and adjusting the chain tension- straightforward in principle, not so in practice, as adjusting the tension requires fingers with eyes on the end, plus twice the number of knuckles, all capable of bending in two or more directions. Sadly John is equipped with none of these remarkable features, but nonetheless managed to complete the task. 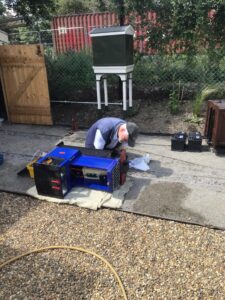 Tuesday is also the favoured day for Richard and William Stone, who are still at it, lining out the workshop and storeroom. This Tuesday just gone found them plasterboarding the ceiling in the storeroom. As usual they’ve done an excellent job, I’m now wondering if I can teach myself the black art of plastering in under 5 minutes. Richard is snapped here hiding his features behind full PPE. At least, I think it’s Richard. It might be the bloke out of the Texas Belt Sander Massacre. Whoever it is, he’s trimming round the window opening with OSB ( Stirling Board to those of a Certain Age ). 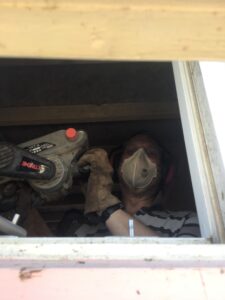 Back to the more recent past, a gang of three of us (Robin, the New John and myself) managed to remove a 6” cotter pin from the connecting rod big end on Scaldwell yesterday. Again, simple enough in theory, but this one cotter pin offered an astonishing amount of resistance, crowbars, jacks, drifts and large hammers all proving completely ineffectual. If you’ve ever tried to remove a rusted cotter pin from an old bicycle, multiply that by about twenty and you’ll have a rough idea. In the end, the use of a chisel as a wedge, driven underneath between the end of the pin and an offcut of rail, did the trick. It took some time, but did enable us to remove the coupling rod, once the crosshead pin was withdrawn and the crosshead pushed forward. The goal is to reduce still further the rolling resistance of the loco, as once the shed is secure at the front end, she will be moved forward to allow access to the rear wall of the shed. Pictured below are three rather triumphant bashers, plus the freed big end. Note how good the condition of the bearing and the crank pin is- much of the loco is like that. Try to ignore how bad the condition of the plate work is. A distressing amount of the loco is like that, too.. 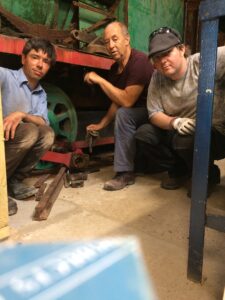 Catching up on the news