In the spirit of catching up with the news, I thought I’d better fill in on some of the other things that have been going on while I’ve been neglecting the Blogosphere. I’ve been down at Blyth Road again today, just fiddling about with bits and pieces, and watering the growing horticultural responsibilities that I’ve created for myself, not only the slowly filling flowerbeds (complete with the Monster Marigold, which has trebled in size since being donated by my Mother, and showing no signs of slowing down subsequently), but also growing expanses of grass, much needed at Blyth Road. I’ve seeded some more this afternoon, along with some clover which I’m hoping will give the bunnies something to feed on instead of the flowers, which they home in on like some kind of furry guided missile. The above image shows the area outside the BVLR shed, which as well as the Monster Marigold, shows how that area has changed since the start of lockdown. The gravel, too, is now finished, and has improved the area outside the café beyond recognition. 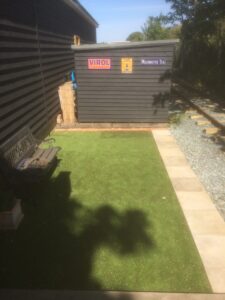 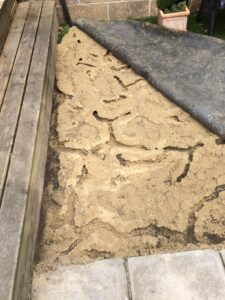 The wildlife continues to increase in its diversity, and also in its determination to undo everything I’ve done. One small triumph I’ve failed to write about before is the small garden we created beyond the end of the 3’ gauge platform on the other side of the station. Hitherto, this has housed a collection of weeds and rusty odds and ends, as well as some off cuts of artificial grass. Having cleared away the odds and ends, we levelled the area with a layer of sand and laid the artificial grass to create an area that could be used for café seating- a veritable suntrap it proved to be, especially in the mornings. After a while, it went curiously lumpy, and lifting a corner, as seen above, showed why. A mole has dug a kind of tube map underneath the whole lot. I’m not aware we’ve ever had a mole before, but by golly we’ve got one now, on Benzedrine it appears, as every time I fill the holes in, he digs the whole lot up again. I’ve seen it, but so far have been unable to catch the subterranean rotter. Add to this the continued problems of badgers (I’ve had to cover parts of the BVLR with plastic, so predictable are their activities), weasels and the perpetual rabbits, and it’s a wonder we’ve made any progress at all. 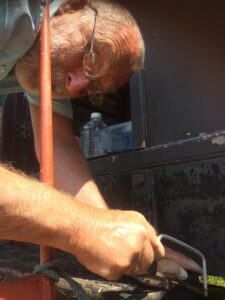 On a more productive note, volunteers are still attending, largely on Tuesdays and Wednesdays, although as we operate at present on the ‘gatherings of no more than six people’ rule, volunteers can come on any day Monday-Saturday, subject to booking in advance with me at the office- 01502 725422. The photo above appears to show Toby adopting a rather severe manicuring regime, but in fact indicates ongoing work to the Manx Northern carriage. Ted continues to polish his way through a mountain of Scaldwell components, whilst John H has just started to turn his attention to another long-overdue job, panelling and completing the WC in the café, another tick of the list as far as our public facilities go. As seen below, we’re not averse to enjoying the new facilities on offer- Whisk, Toby and John H are pictured a few weeks ago taking advantage of the shade (and the new gravel) during lunch. Seated the regulation 2m apart, they brought to mind something about three wise monkeys, although which represents which I’m not entirely sure.. 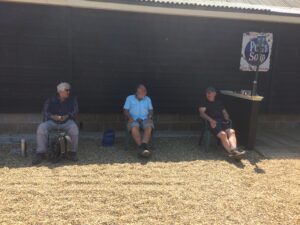 Robin and I have been back on Saturdays completing various tasks, including recommencing  work on the driving tender for ‘Rosie’, the Ken Swann 0-4-0 that was the first loco on the BVLR. Once that’s done, the loco itself will need to come in for some fettling to iron out the niggles evident in last year’s running.
At the other end of the scale, I’ve been trying out the paint from Craftmaster for Scaldwell’s inside motion. It’s beautiful stuff to use, the final topcoat having a wonderful depth of colour due no doubt in part to the use of a red undercoat beneath the final gloss topcoat. At the moment I’m painting the eccentric straps and rods, as and when I get a chance. I think you’ll agree, they’re beginning to look very smart. 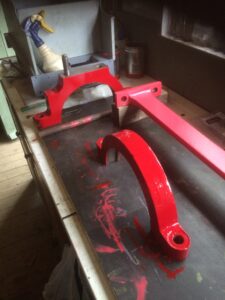 Technically it’s not necessary to paint and finish these yet, as it’ll be some time before they’ll be needed again, but it’s good for the soul to see an increasing pile of finished parts, and good for the public to be able to see the progress being made. By the time we can open properly again, we should have a healthy quantity of finished motion parts to display, and hopefully inspire interest in the project. It’s fairly low-level at the moment, but work is ongoing, and as we cross some of the more pressing items off the list, we hope to devote more time to the old girl. Certainly it should provide us with even more to blog about- or to fall behind in blogging about, if my own track record is anything to go by!