No, I’m still not updating here enough. Mind you, there’s been a lot of work going on, so I’ll claim that in my defence, but passers-by at Steamworks are beginning to ask about updates (through the fence, obviously, due to social distancing. It’s a little reminiscent of Escape from Colditz or The Wooden Horse.) On the plus side, it’s gratifying to know so many people, both members and non-members, are reading the Blog. If you are a non-member reading the Blog, then do please consider joining- we have both active and non-active members, and all are welcome, whether you wish to volunteer or not- although if you would like to be a volunteer member, you’ll be made very welcome here at Steamworks. There’s plenty of practical tasks- not only engineering, joinery, painting and restoration of numerous items, but as the site improvements continue, we have a greater need for gardeners, groundworkers- you name it! During our open seasons (whenever that may be) we will also need people who enjoy working in a public-facing role, be it the Shop, the Café, the BVLR, or simply welcoming people to the site and showing people around. It’s an enjoyable way to spend a summer Saturday. 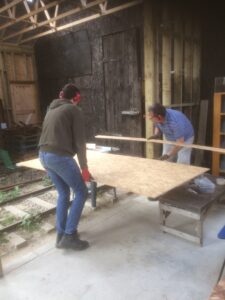 Anyhow, back to the current works. As John mentioned in the previous post, Richard and William Stone have been hard at work. They’ve made a start on insulating and lining out the new workshop in the engine shed extension, which I’m looking forward to fitting out. This will be for metalworking and engineering use, and will represent a major boon to the work on Scaldwell, for which conditions have been less than perfect thus far. In addition to this, Richard and William have been cleaning and painting some original Southwold Railway point components, given to us some years ago by the East Anglian Transport Museum. 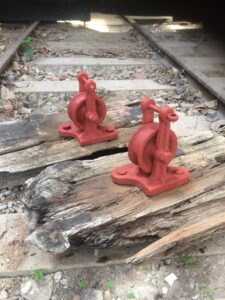 One or two interesting things came to light while R&W were working on these components. One was the fact that the counterweight on the lever showed indications of having been painted in two colours- red on top, whilst the remainder of the lever was painted white. On consulting a photo of the pointwork outside Halesworth station, it became apparent that this was indeed the colour scheme- two colours are clearly visible, the reason being that the axis of the lever was perpendicular to the line of rails, the red/white giving a clear indication of whether the points were set for or against the oncoming train. 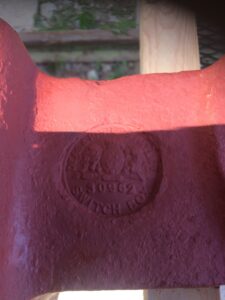 The other interesting detail, shown above is the patent stamp, in the name of Deas and Rapier. Rapier, as one might guess, is the same Rapier as Ransomes and Rapier. James Deas was the actual inventor, a Scottish harbour engineer who, notwithstanding such aquatic tendencies, became chief engineer to the Edinburgh and Glasgow Railway, before moving on to the Clyde Navigation Trust. A short biography of the man is available on the Graces’ Guide website here:  which also supplied the following picture of the man, predictably bearded to the gills.

The patent referred to was taken out jointly in the names of James Deas and Christopher Rapier in 1866, and referred to “the invention of improvements in apparatus relating to railway switches, signals and stop blocks”. What brought the Scot together with the Suffolk-based Rapier we can only conjecture, but it seems likely that Ransomes and Rapier were the licensed manufacturer of Deas’ designs, and also likely that R&R were responsible for adopting this pattern of equipment on the Southwold Railway, as they were the contractors for the line. Indirectly, Ransomes were also responsible for the (wholly untrue) story that the Southwold rolling stock had come secondhand from China. Ransomes had been contractors for the Shanghai and Woosung Railway, a line built by the British under false pretences, the first railway in China and a major political faux pas for the British in China. Its history was short, dramatic and ultimately futile, the line being ultimately destroyed by the Chinese. However, the Shanghai and Woosung was a 2’ gauge railway, and photographs show that the stock was vastly different from that used on the Southwold. Nonetheless, the story still proves difficult to stamp out, it having been a question frequently put during the SR Bust Tours we ran a few years ago. But isn’t it interesting how many threads can be drawn just from one solitary object?