Not that of Stephenson’s recent triumph with new-fangled steam propulsion- even Suffolk isn’t that behind on the news. No, this is a further update from North Bay Engineering on the progress being made on the ‘Blyth’ replica, which in their usual fashion is remarkably swift. 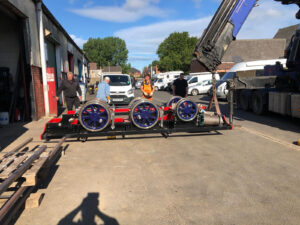 First and foremost, a good photo of the frames and wheels outside the workshop.. 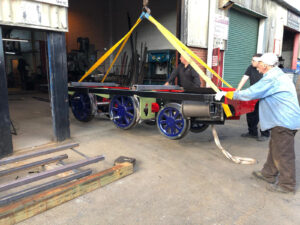 ..in the process of being turned the right way up for the first time.

Since these photos have been taken, Dave at NBE has sent us some further photos, plus an update on what they’ve been up to. Work is now in hand fitting the footplating to the frames, so that now it’s really beginning to resemble a locomotive. After working away on Scaldwell, one really starts to appreciate the joy of having nice, clean, unworn and unrusted components to work with. 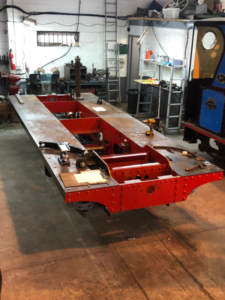 Quite apart from the superstructure work, Dave tells us that work on the inside Stephenson’s motion ( so George Stephenson, or perhaps more accurately his son, got a look in on this post after all ) is currently underway, with the eccentric sheaves and straps being cast and awaiting machining, and the rods soon to be fabricated. For the uninitiated, the eccentric straps, which embrace the eccentrics mounted on the driven axle and impart reciprocating motion to the valves via their rods, will be very similar to those on Scaldwell – featured in my previous post in their new coat of red. Also in hand is the manufacture of the drop links, expansion links and die blocks, the last two being they key element that made the Stephenson’s Link valve gear superior in efficiency to anything  that had been before it, by giving (theoretically) perfect adjustment to the valve events for any working situation, rather like the way in which one changes to an appropriate gear when driving a car. I’ve borrowed an image of the complete assembly below, borrowed from Wikimedia commons- although the operation of it may not be apparent to the casual observer. 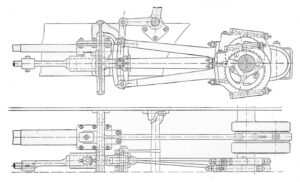 As with so many things, it’s much easier to explain what it does than how it does it, but take it from me the important bit is the banana-shaped bit- the expansion link. Maybe one of these days I should write a post explaining it all- we do, after all, have a complete dismantled set of parts for illustrative purposes.. 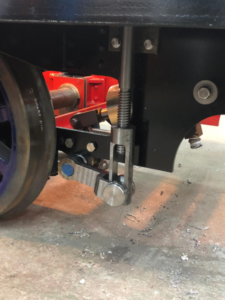 Above, we see the brake rigging in position- what we’re actually looking at here is the Acme screw thread on the bottom of the handbrake stanchion, which operates the brakes through a bell crank and linkages. Just visible behind the handbrake screw, between the frames, is the new steam brake cylinder. Not an original fitting on the Sharp, Stewart locomotives, it is nonetheless a desirable refinement in this day and age, the originals being only fitted with the screw handbrake. If nothing else, it will certainly represent a less effortful means of bringing the loco to a stand!