Well, it’s 2021 and the start of another year, although it would be a bit of a challenge to tell the difference between this year and the previous one. Nonetheless, allow me to wish the readers of the blog a slightly belated Happy New Year. We have of course suspended volunteer activity here at Steamworks for the time being, but we are keeping a close eye on the situation and hope that we may be able to open later in the year if and when things improve. 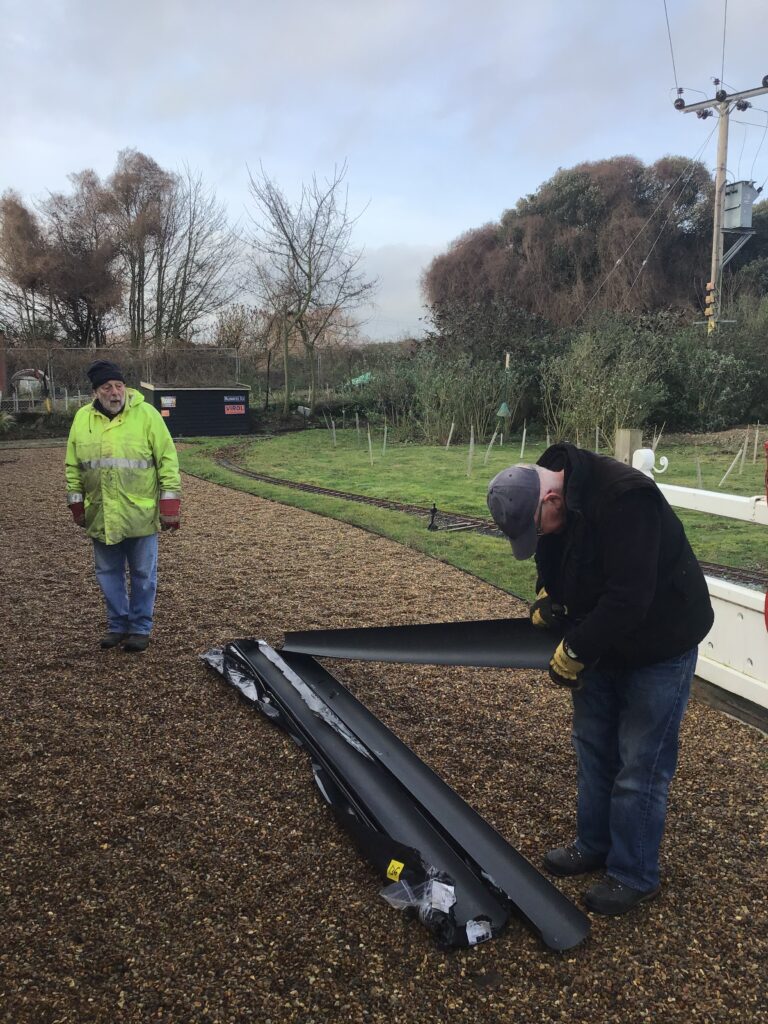 However, volunteers were working up to Christmas tackling the wide range of jobs needed here. Work has been continuing both inside and outside the new engine shed, with John and Toby fitting guttering to the roof, which will hopefully mitigate the problem of the rainwater run-off flooding just about everything. 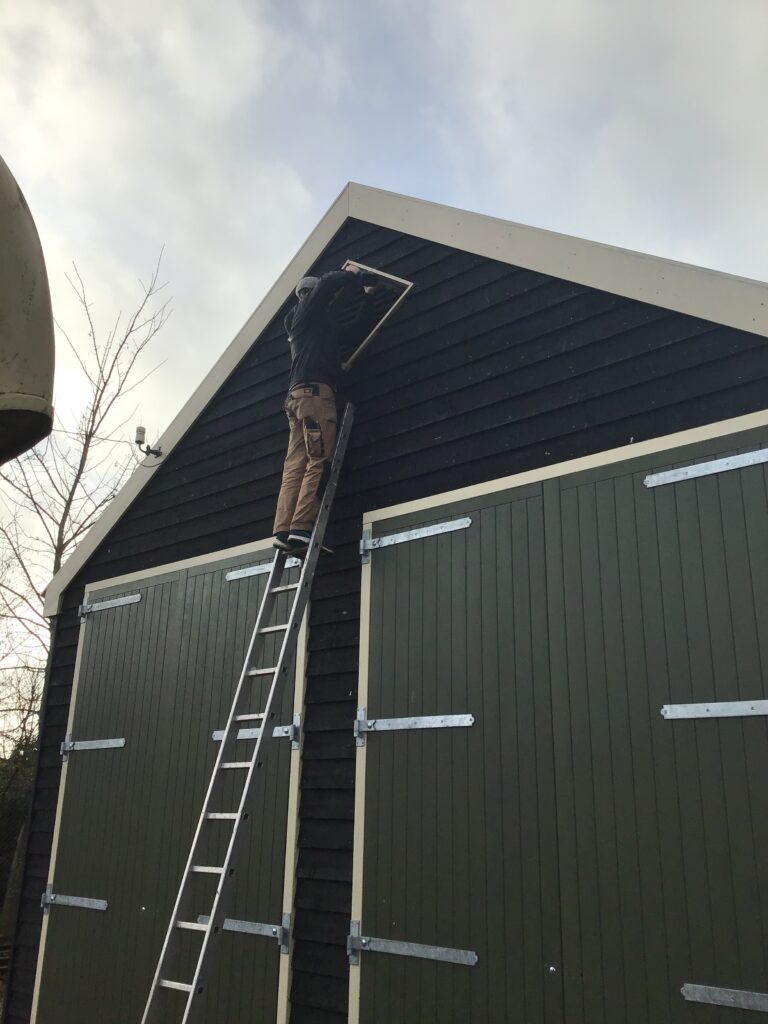 We also had a welcome return visit from John Rawlings, the joiner who made the doors for the locomotive shed. He had manufactured a set of louvres for the vent in the gable end, involving some head-squeezing geometry where the angle of the louvres themselves met the angle of the frame. 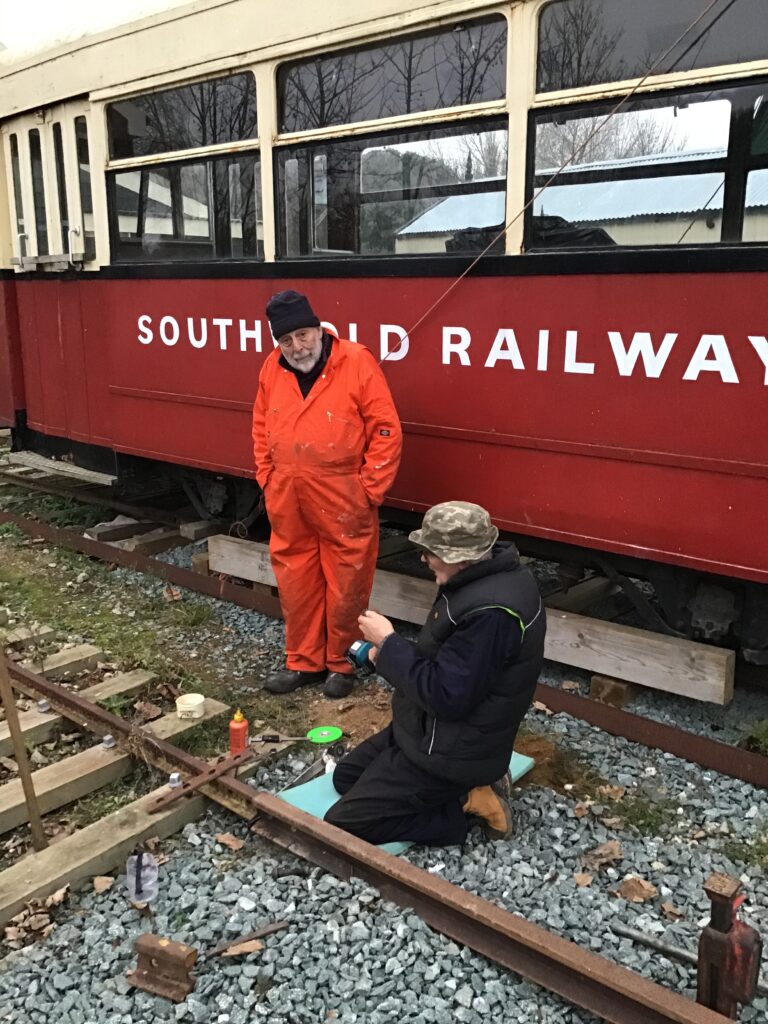 Whisk (with some assistance) has been working steadily away on the 3’ gauge track, which needs to be completed before Blyth arrives so that stock can be easily moved from one shed road to another- at present, stock remains trapped on the road on which it sits. 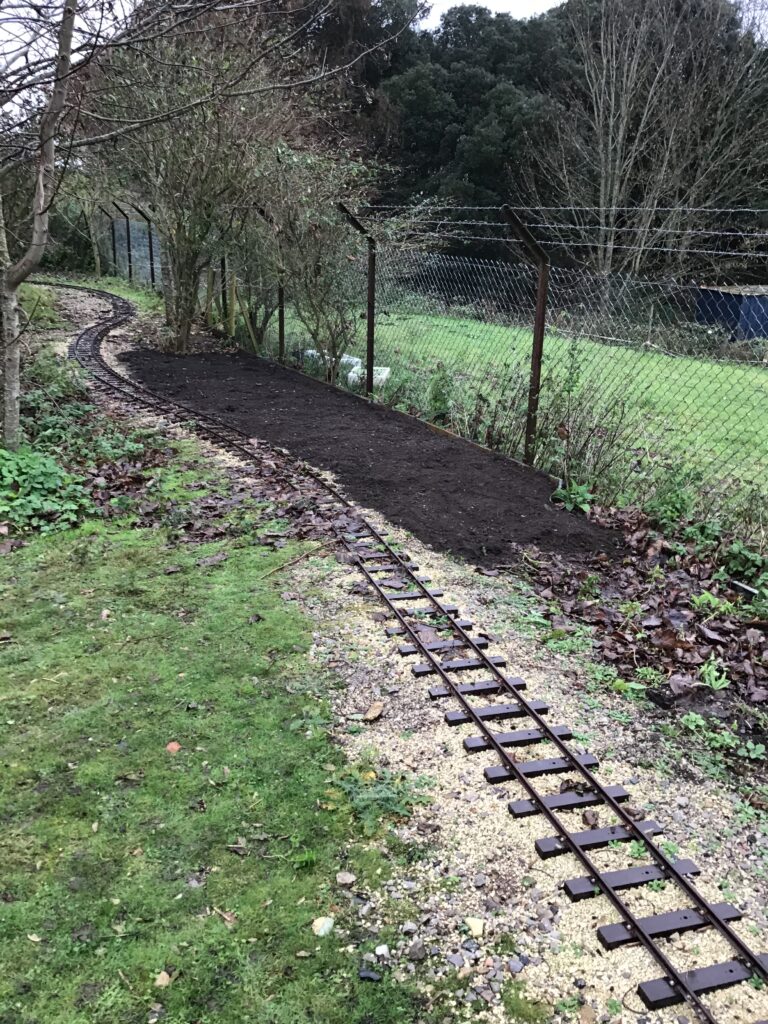 One significant advance in December was the arrival of 200 saplings from the Woodland Trust, arranged by Maureen Ridgway. These were to be planted around the site, to which end it was necessary to build up some of the land towards the back of the site, Blyth Road having ground which varies from soil to solid rubble, generally whichever is least convenient for whatever it is you’re doing at that spot. Fortunately, a large quantity of donated topsoil meant that the ground could be ‘improved’ to accept the new planting. 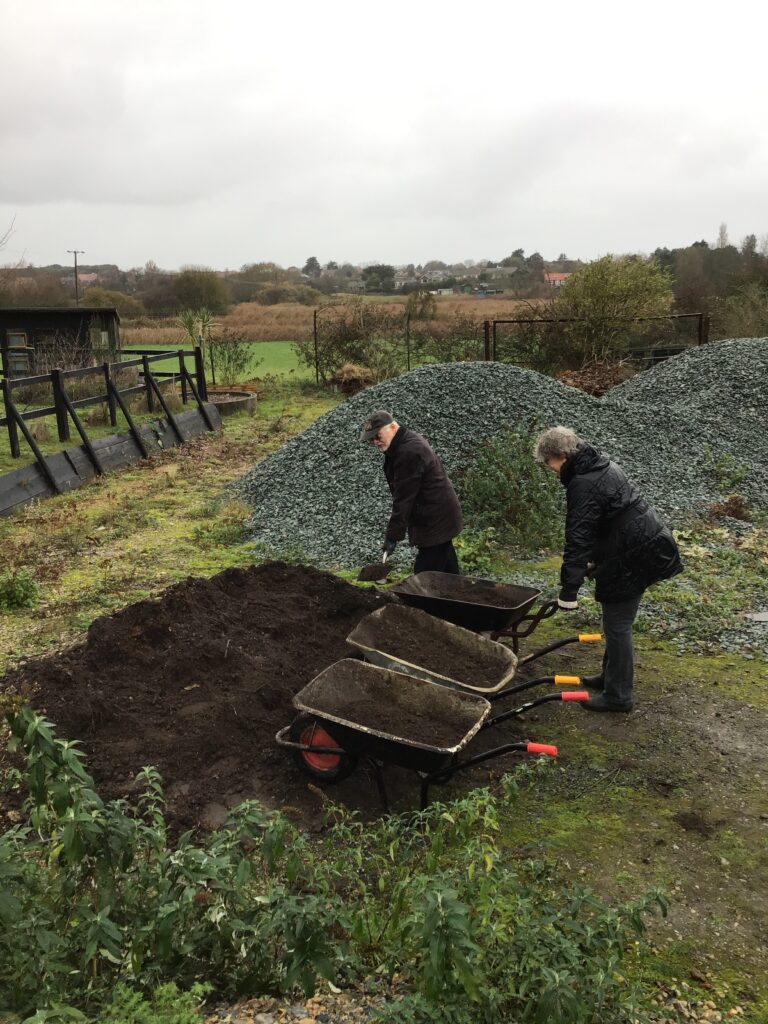 Here Maureen and John are barrowing the pile from the car park to where it was required.

When it came to planting the trees, we were pleased to have the assistance, on a rather cold and damp Saturday, of some members from the 1st Southwold Scout Group, through the agency of one of our members Bob Mole, who wears an additional cap as a Scout Leader. Assisted by volunteers, they planted the whole lot, and didn’t look too put out by the cold and damp. They are of course all smiling happily under those masks. Honest. 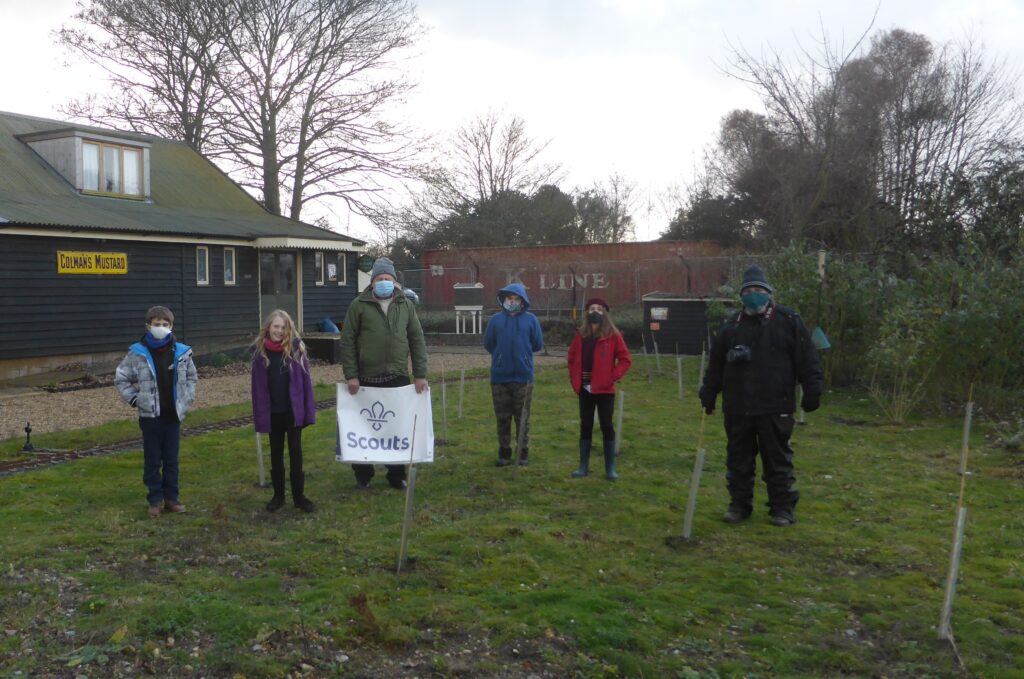 Elsewhere, North Bay Engineering are still working on Blyth, to the point that she can now be run the length of the workshop on compressed air, which is a very satisfying development. Fabrication of the tanks and cab will proceed shortly, bringing us ever closer to ownership of a complete, operating steam locomotive. 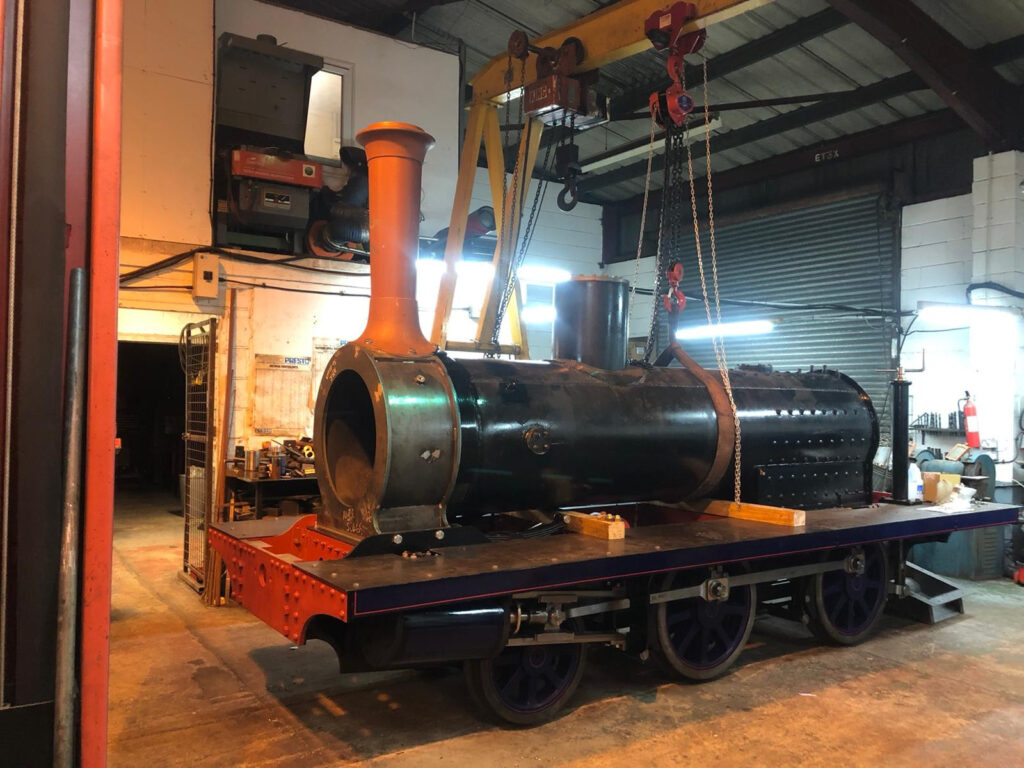 The chimney, which has been here at Steamworks for some time, has been trial fitted to the new smoke box, making the whole thing look very much like a locomotive. If this pace of work continues, we will see Blyth here for the summer, which will definitely be a high point for 2021, whatever else may happen.

Speaking of opening, I was searching for images in response to an enquiry this week, and came across a rather nice little video on YouTube of Steamworks in 2019. Grim the weather may have been, but it’s nice to be reminded of when we last had an actual Summer Season. Let’s hope we get one in 2021, too. It’s also comforting to compare the site then and now, and to see how far we’ve come during an otherwise disappointing year. Onwards and upwards!