One thing to be noted regarding the lockdown, and my own glorious isolation at Steamworks, is that the wildlife is becoming rather more bold than hitherto. The resident weasel wipes out the odd rabbit, whilst the resident rabbits (a considerable number) wipe out anything planted in the banks or flowerbeds, whilst a suspected badger has been digging prominent holes, presumably in pursuit of the aforementioned rabbits, who must be beginning to wonder if there’s anything out there that doesn’t want to eat them.
I mostly miss out on all this crepuscular activity, leaving as I do at a reasonably respectable hour, but the feathered wildlife (or indeed, not-so- wild-life)  is conspicuously active. Quite apart from the seagulls and the perpetual chorus of crows nesting in the trees, a duck and drake drop in regularly to derive whatever kicks they can from the currently rather diminished pond, and a tiny bluetit has taken up residence in a hole in the side of the portakabin, not to mention the swifts that seem to have taken a shine to the extension of the engine shed.

Tending more towards the more domestic end of the spectrum, a trio of bantam cocks turned up a couple of weeks ago and took up residence for about five days, roosting up amongst the brake rigging on the Manx Northern coach and pottering idly about during the day. I took to feeding them on the third day, as they showed no inclination to return to wherever they came from, but clearly the accommodation was not up to their standard, as they had cleared off by the fifth day, leaving not a wrack behind. A shame, as I was becoming rather accustomed to them wandering around. 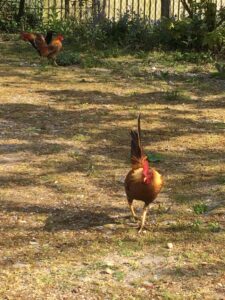 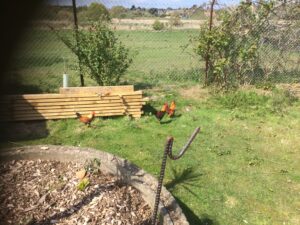 A slightly more outrè element is the intermittent visits of a pair of peacocks, who have dropped in on a few occasions to eye me balefully from various unexpected and improbable locations. None more so than encountering one in the office one evening, having left the door open as I had a final check round before leaving. It departed without fuss, but looked curiously at home amongst the soft furnishings. A house peacock may be a little beyond the pale, however.. 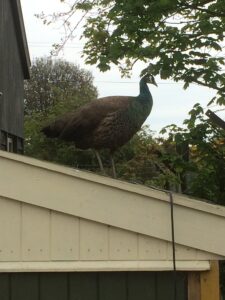 Strictly for the Birds
Tagged on: Lockdown    wildlife