The arrival of the military and their impressive track laying exercise effectively banished Robin Vintner and myself from the cosy little workshop in which the ongoing maintenance and reconstruction of the BVLR locomotives and rolling stock is under way, but gave me two clear days to make some more progress on Scaldwell. Much needed, as the last opportunity (according to the logbook) was in August! So, while tracklaying went on apace outside, I ‘got out and got under’ in the words of the old music hall ditty, and set about taking down the inside Stephenson’s valve gear, mounted on the middle (driven) axle just ahead of the firebox.

Never an attractive proposition, conditions between the frames are cramped, and without a pit a certain amount of athletic shimmying is involved to get in and out, but with the aid of a fistful of spanners and a large hammer, I was able to completely strip down and remove all four eccentric rods, drop links and the two expansion links for cleaning, inspection and reconditioning. 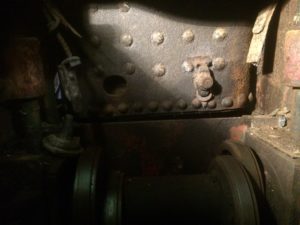 The view from between the frames- look, no valve gear!

Those who have seen Scaldwell in the shed could be forgiven for thinking that she was something of a basket case- the saddle tank especially is about as watertight as a basket- but once you start delving into the mechanics, the condition is surprisingly good. The motion, by and large, came down easily, and the working surfaces of the eccentrics, expansion links and die blocks are in excellent condition, play being well within working tolerances. Hopefully this benevolent circumstance will extend throughout the mechanical strip down.

The immediate short term goal is to reduce rolling resistance as far as practical to make the manoeuvring of Scaldwell in and out of the shed as easy as possible. Once the conrods are down and the hornblock bearing oil wells are cleaned out and lubricated, the opportunity will be taken to wheel her out and lift off the saddle tank, after which attention will turn to dismantling the superstructure and stripping the boiler lagging to allow closer inspection of that crucial component’s condition.

One must never speak too soon, but initial inspections augur well. The internal condition of the boiler above the tubes appears good, although of course it will be the lower half of the barrel that will tell the truth. During my incarceration between the frames, I managed to remove one of the mud hole doors around the firebox foundation ring, and after removing several handfuls of debris ( it doesn’t seem that washing out was a priority for the last few days in steam back in the 1960’s! ) I was  cautiously pleased to note little wastage around the ring or at the stay ends, although of course this is only an examination of an 8” area through a tiny hole with a torch. 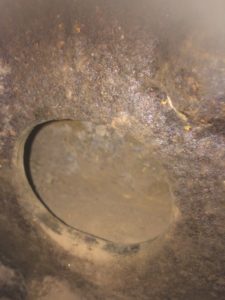 Not picture postcard material, but a clean-ish foundation ring

As work continues, I will try and update with news and photos, although during this off-season period, the top priority is making sure that the BVLR stock is in good form for this summer. Nonetheless, the growing pile of Scaldwell parts should give us plenty of fill-in jobs if we ever get bored! 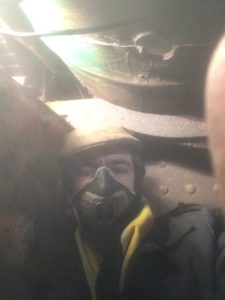